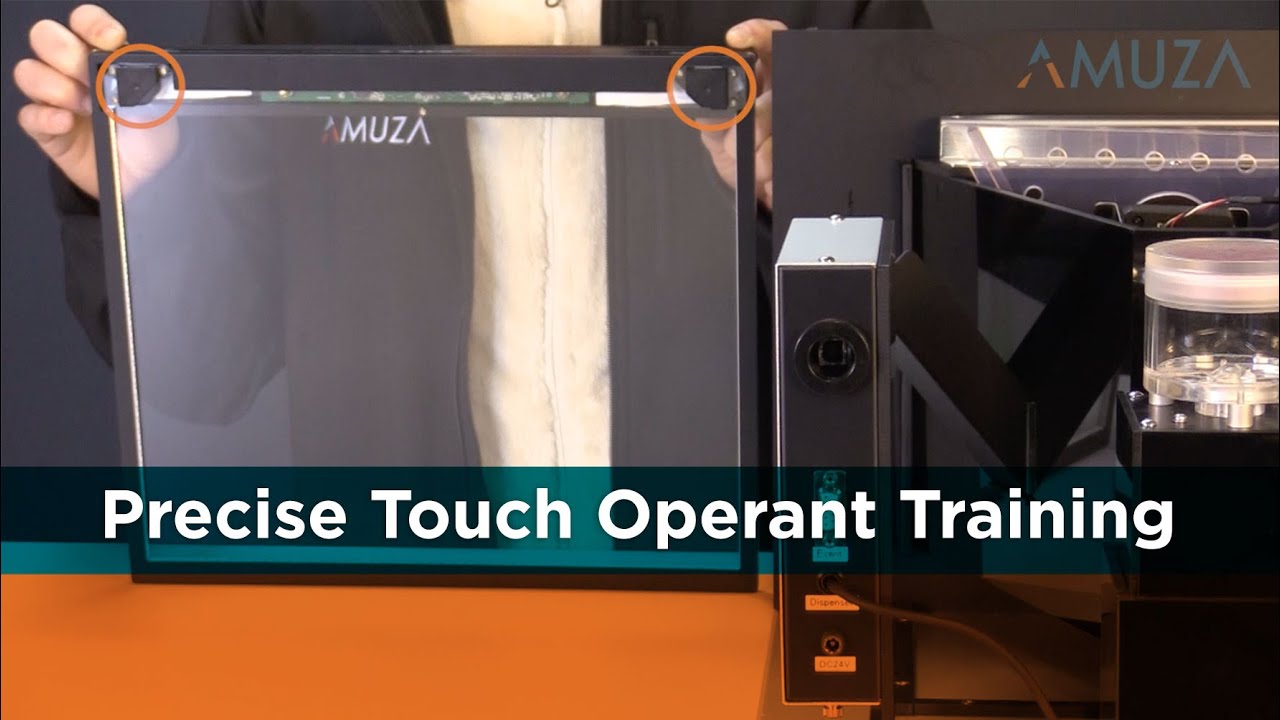 What is unique about our chambers is that they contain infrared sensors located at the top of the touchscreen itself that improve the accuracy of touch responses from small rodents.

Unlike the touch screen technology that most of our smartphones and computer screens use, called projective capacitance, the infrared sensors inside the touch screen improve accuracy by eliminating the need for a minimum force required to generate a response. This means that even nose poke’s from mice will register a response.

In addition to improved sensitivity, our touch panel was designed in a trapezoidal shape instead of a square, making it easier for the animal to focus on the screen ahead.

Our touch panel chambers are compatible with in vivo electrophysiology and optogenetics techniques, as well as with miniature head-mounted microscopes.

Chambers can be purchased singly or in a package of four for a more cost-effective option. In addition, the chambers come with our Operant TaskStudio software package, an extremely user-friendly software platform that enables customers to design and execute their own tasks or choose from a variety of pre-programmed tasks.

Check out more about our software in our next video. To learn more about our Touch Panel operant system please check out our product website or connect with an expert.

Factors that Influence Experimental Outcomes and How to Overcome Them

Experimental outcomes can be influenced by a variety of factors, some of which can be controlled for. Minimizing confounding factors is crucial to gathering reliable and repeatable results.

One of the biggest issues in animal research today is the replicability of results. Too often animal study outcomes can not be repeated. This is not hard to believe given that the use of animals themselves provides inherent variability, even when all other factors are controlled for. Differences in the strain of animals used, as well as the age of the animals, time of day that experimental tests are administered, and how long the animals were handled prior to experimental testing are just some of the factors that can impact experimental outcomes.

While it is impossible to eliminate all external factors, animal-experimenter interactions can have a huge impact on results and should, therefore, try to be minimized as much as possible.

How can you mitigate animal-experimenter interactions?

At AMUZA, we offer a variety of automated behavioral tests that were designed specifically to improve the reliability and repeatability of behavioral assays.

For example, our Touch Panel operant training system is an automated operant chamber that utilizes photo beam sensors in the touch panel itself to improve the accuracy of responses from small rodents. The Touch Panel also includes software that enables users to design and run their own tasks with video tracking capabilities for automated data collection.

Even our standard mazes come with video tracking and automated data collection and analysis.

Furthermore, one of our other products, the Self Head-Restraining Platform, was designed to completely automate the head-fixation process in mice in order to streamline head-fixed behavioral assays.

In fact, the platform, originally developed by Dr. Andrea Benucci at RIKEN brain institute, was designed specifically to help overcome the reproducibility crisis.

Not only do our tools free up experimenter time and labor to focus on the actual science, they help remove unwanted experimenter bias by standardizing the experimental testing arena.

Even with automated behavioral tasks, however, it is still possible to introduce experimenter bias. This is why we also recommend that you perform rodent behavioral tests at roughly the same time each day, as well as handle experimental animals equally. Ideally, the same experimenter should be handling the animals each day. If this is not realistic, different experimenters should be counterbalanced across days, or across testing groups.

Additionally, with our automated rodent behavior systems, we recommend that the motivation of the experimental animals to perform the task is consistent. If animals are food or water-deprived, weights should be taken daily initially and then weekly thereafter to ensure that test subjects are maintained at similar percentages of their free-feeding body weight.

Cleaning the testing chambers between use

All of our behavioral tests are made out of acrylic that is easy to clean as well as removable floors. Testing arenas should always be cleaned between experimental sessions to make sure the scent of the previous animal will not influence behavioral results.

For more detailed information about our automated behavioral tests connect with us today.

Our Recommended Tasks for the Touch Panel System 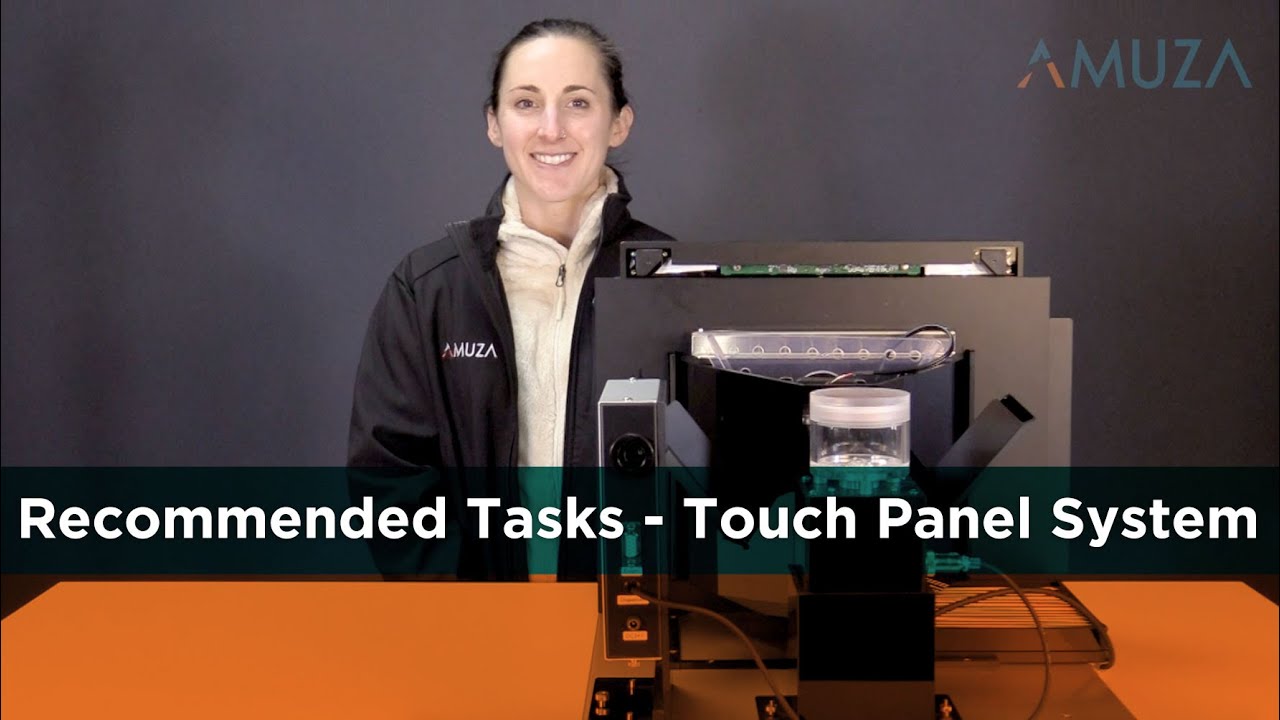 If you are new to behavioral neuroscience, choosing the right behavioral test for your experiment can be a challenging task. Luckily our touch panel operant conditioning chambers are extremely flexible and allow users to run a variety of operant tests in laboratory animals. Today I’m going to talk about 4 common tasks used with our operant conditioning chambers and what they measure so you can hit the ground running with your experiments.

The first is the Visual Discrimination task:

This task involves learning that one of the two shapes displayed on the screen is correct. Touching the correct stimulus is rewarded with a liquid or food reward and touching the incorrect stimulus is punished with a timeout where the mouse or rat cannot start another trial. Once the mouse or rat learns the correct stimulus, the stimuli are reversed so that the previously rewarded stimuli now results in punishment. This type of reversal learning requires the mouse or rat to inhibit automatic responses that require the prefrontal cortex. This task is a great measure of cognitive flexibility and is a great tool for examining animal models of many neuropsychiatric disorders like schizophrenia or autism.

How to Get the Most out of Your Operant Training Chambers

In this post, we describe four common tasks you can use with your operant training chambers, and what exactly they measure. All of these tasks are easy to program with our Touch Panel operant chambers and TaskStudio software.

Learn more about our chambers and their unique specifications here.

This task involves learning that one of the two shapes displayed on the screen is correct. Touching the correct stimuli is rewarded and touching the incorrect stimuli is punished with a timeout where the mouse or rat cannot start another trial. Once the mouse or rat learns the correct stimuli, they are reversed so that the previously rewarded stimuli now results in punishment. This type of reversal learning requires the mouse or rat to inhibit automatic responses that require the prefrontal cortex. This task is a great measure of cognitive flexibility and is a great tool for examining animal models of many neuropsychiatric disorders.

This task requires the rodent to respond to a brief visual stimuli presented randomly in one of 5 locations. It is used to measure attention span and impulsivity control in mice and rats and is useful for animal models of ADHD.

Performing Optogenetics and Behavioral Tests? AMUZA has you covered!

Did you know that our wireless optogenetics system is fully compatible with our Touch Panel operant chambers?

Using our Teleopto Wireless Optogenetics system in combination with the Touch Panel operant training system, you can manipulate neuronal activity in real-time during operant behavior.

Now with Teleopto Wireless Optogenetics, you can use 2 channel pulse receivers enabling you with more flexibility over your experimental design.

You can use our 2 channel pulse receivers for stimulation and inhibition at a single site or in combination with bilateral implants, allowing independent control of each side.

Current Teleopto customer, Hirofumi Morishita at the Icahn School of Medicine at Mount Sinai is examining mechanisms of developmental critical periods in the Prefrontal Cortex.  Loosely, he is interested in examining how attentional processes are shaped during the critical period and what goes wrong in this process in neurodevelopmental and psychiatric disorders by studying attention.

Attention is a goal-directed process by which animals can pull out task-relevant sensory stimuli from noisy environments. Deficits in attention are common to many psychiatric disorders, including autism, schizophrenia, and depression.

Currently, the Morishita lab is focused on understanding the connections between frontal and visual cortices that guide attentional processing. Previous work has demonstrated that the Anterior Cingulate Cortex (ACC) in the frontal cortex has “top-down” control of sensory processing in the Visual Cortex (VIS), but how this processing contributes to attention is not well understood.

Are you interested in learning how you can monitor and manipulate neural circuits in freely moving animals for rodent behavior? Connect with one of our experts at AMUZA to learn more!

After Tokyo, I took the bullet train to Kyoto University to visit Dr. Watanabe’s lab.

He currently uses both the TaskForcer and the Touch Panel operant chamber for mice.

Dr. Watanabe is interested in understanding the role of the secondary Motor Cortex in motor planning. He measures a very simple behavior, licking response, which requires just movement of the tongue. For this, Dr. Watanabe designed a custom TaskForcer setup with dual spout ports instead of the single spout-lever. He then created a simple task where animals learn to choose the correct spout (left or right) that varies across trials, in order to receive a liquid reward. In this way, he can examine the role of the Motor Cortex in motor planning, with very little movement of the animal during neurophysiological recording. Regarding the TaskForcer, Dr. Watanabe reiterated, “ With the TaskForcer, I am able to get precise and reliable measurements of neural activity during behavior!”

Me with Dr. Watanable in front of his two-photon imaging setup, where he was currently tracking calcium responses of neurons in the Motor Cortex while a mouse was performing the task.

Next, a few of Dr. Watanabe’s lab members provided a demonstration of the Touch Panel operant chamber for mice. They have three Touch Panel chambers and are currently using them to train mice on a 5 choice serial reaction time task to measure attention.

Me with Dr. Watanabe’s lab members in their Touch Panel testing room.

Next stop – Doshisha University in Kyoto!