How to Choose the Best Microdialysis Probe for Your Project 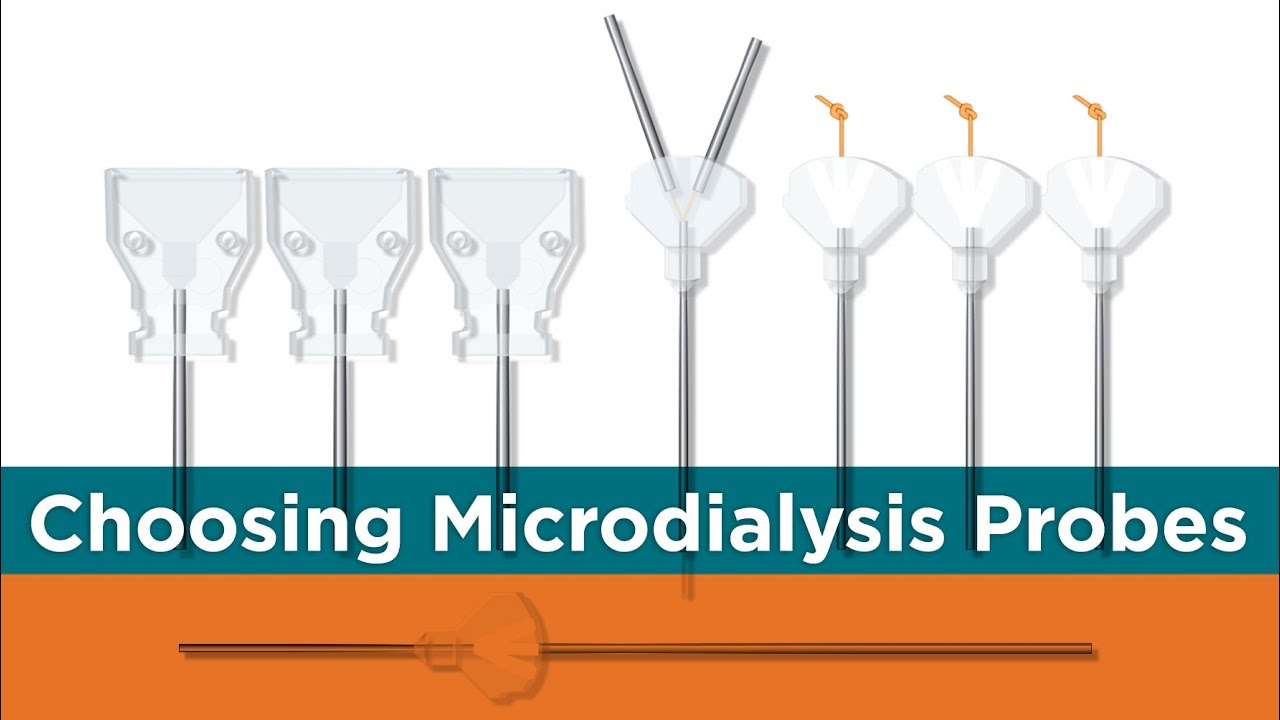 If you will be doing chronic microdialysis to measure dopamine, serotonin, acetylcholine, amino acids or other small molecules in mouse and rat brains, then, our FZ and CX probes are the best choice. These offer industry-leading recovery rates (the ratio of the concentration of an analyte in a recovered sample to the concentration of the analyte in the area surrounding the microdialysis membrane) for small molecules.

When you are working with mice, we recommend lightweight CX-i probes as your first choice. The CX’s narrow-body allows for bilateral microdialysis, even if your targets are close to the midline. The CX probe snaps into its guide cannula, so it is quick to insert and remove. For rats and for longer experiments with mice we recommend our newly released FZ probes. The FZ probe is secured in the AG guide cannula by a cap nut (AC-5), locking it into place. This way rats and cannot dislodge the probe by scratching at it. The FZ probe is very similar to our outgoing AZ probe: we kept the best parts of the AZ probe and then made it both easier to use and more robust for use with more active adult rats. The FZ probe uses the same guide cannula and accessories as the AZ probe.

The FZ probe is also offered with a microinjection option: a microinjection cannula (orange) is attached to the MI-AZ probe so that drugs, antibodies, and other molecules can be delivered to the microdialysis site at a specific time(s). For acute microdialysis experiments, where the mouse or rat remains on the stereotaxic frame during the entirety of the experiment, we have the DZ probe. This is our smallest probe, and it is intended to be directly implanted without a guide cannula. While we recommend it for acute experiments, The DZ probe can be used for shorter experiments with freely moving mice.

Researchers use our AtmosLM™ large molecule microdialysis probes to measure levels of peptides, proteins, antibodies, and even ApoE (Apolipoprotein E) particles. These probes have membranes with a molecular weight cut off of one million daltons. The AtmosLM PEP probes are superior to other push-pull probes because we add a vent to equalize pressure between the lumen of the probe and ambient conditions. This stops convection – the bulk transfer of water and solutes being driven across the membrane by pressure – and greatly enhances the accuracy of sampling. We offer these probes with polyethylene – uncharged – and polysulfone – charged membranes, to match your analyte. If you will need to do MRI or PET imaging studies with the guide cannula and probe in place, we offer C-I probes and guide cannulae. The C-I series are metal-free and won’t interfere with imaging. All of the probes discussed above were designed for use in the brain, but we also have probes for peripheral tissues. The OP linear probe is designed for dermal use and has a needle at one end to make it easy to implant, and the TP flexible concentric probe can be used in blood vessels and the GI tract.

Many of our probes can be made with different membrane materials. If you would prefer a polyethersulfone (PES) or polyacrylonitrile (PAN) membrane instead of cuprophane (artificial cellulose), please ask us. All of our probes, stereotaxic adapters, and accessories are made to your custom size requirements in just two weeks – even for the smallest orders. We also maintain a large inventory of FZ, CX-i, and PEP probes ready to ship the day you place your order.

If you are planning a new project or having trouble with your current one, please give us a call and we can help you troubleshoot. Eicom has been manufacturing microdialysis probes and equipment for 30 years and we have an integrated support/sales team so you can rely on our expertise. How to Improve Microdialysis Throughput and Success Rates There are many ways to speed up your microdialysis experiments and ensure their success.

And finally – Ask Amuza!
Amuza (formerly Eicom USA) has decades of experience in microdialysis and HPLC-ECD, and we are always ready to help. The brain is a challenging target for therapeutic monoclonal antibodies (mAbs), nanobodies, antibody drug conjugates (ADCs), and other drugs. The blood brain barrier prevents many drugs with otherwise good absorption profiles from crossing into the brain, and also complicates attempts to model how drugs are distributed within the brain.

Prof. Dhaval Shah and PhD student Hsueh-Yuan Chang of the University at Buffalo study the pharmacokinetics/pharmacodynamics (PK/PD) of therapeutic antibodies and ADCs. Their lab recently used the Eicom AtmosLM (large molecule) microdialysis system as a way to quantitate a mAb in multiple brain regions simultaneously, generating data to underpin pharmacokinetic models for the disposition of mAbs in rats (1,2). They found that tissue homogenate and lumbar cerebrospinal fluid samples do not make good proxies for predicting mAb concentrations at their sites of action within the parenchyma of the brain. They also found that the lateral ventricles and the blood-CSF barrier may be an important route for mAb entry.

AtmosLM is a push-pull microdialysis system for measuring the levels of large proteins and peptides, as opposed to the catecholamines and other small molecules typically measured by microdialysis. AtmosLM features unique probes that incorporate vents to equalize the pressure inside the membrane of the probe with the outside atmosphere. This prevents ultrafiltration and yields more consistent analyte recovery rates than other push-pull systems. It has been widely used to study levels of Abeta, Tau, synuclein, lipidated ApoE particles, cytokines, and other molecules. Recently, the Derendorf lab
(U of Florida) used AtmosLM to determine tissue interstitial concentrations of mAbs in liver, skin, kidney, and muscle after IV dosing to aid in their development as anticancer drugs. Amuza spoke with Hsueh-Yuan (Luke) Chang about how he used AtmosLM in this project, and he also shared several tips for other users of AtmosLM.

Amuza: Could you explain how your PBPK (physiologically-based pharmacokinetic) model can be used by those studying the use of mAb based drugs in the brain?

Hsueh-Yuan: Our current version of the PBKP model was developed to capture nonspecific mAb distribution in the brain and different regions of the brain. Additionally, it can help to quantify the correlation between mAb concentrations in brain CSF and ISF. It may also help to quantify the amount of mAb entering brain parenchyma versus brain CSF compartments.
While the nonspecific mAb PBPK model has not incorporated target binding or receptor-mediated transcytosis yet, both novel delivery mechanisms and target binding kinetics can be mechanistically added into the current basic version of the PBPK model.
The final version of the PBPK model for mAbs may provide an a priori prediction of mAb distribution in the human brain once kon/koff of values of specific mAbs and receptor/target concentrations in the brain have been included. This prediction could be tested in rodents and primates.

Hsueh-Yuan: They do not provide direct information of the mAb concentration at the site-of-action as we mentioned in the introduction of the paper. There are many studies suggesting mAb concentrations are different between CSF and ISF.
More importantly, some studies have reported mAb accumulation within brain capillary cells, which may utilize endogenous receptor binding to enhance brain uptake of mAbs.

Amuza: I’d also like to ask you a few questions about using our AtmosLM system.

You used siliconized sample tubes to prevent adsorption of antibodies in your samples to the plastic. Would blocking the tubes by rinsing with BSA work as well?

Hsueh-Yuan: Yes. However, the storage of low concentration IgG microdialysates requires 0.1-0.15% BSA. BSA is compatible with ELISA. For LC/MS, the BSA method should be replaced.

Amuza: Do you think endogenous IgG could be used similarly to an internal standard to suggest whether or not a microdialysis experiment is working correctly?

Hsueh-Yuan:  Yes, ELISA methods can quantify rat, mouse, or human IgG specifically. They can serve as an endogenous IgG reference, a proxy for calculating in vivo recovery of the mAbs themselves. Hemoglobin can be used, too.

What happens if fluid recovery is outside of this range?

Hsueh-Yuan: Then convection [bulk flow of solutes and solvent across a membrane due to a pressure imbalance] will happen.

Amuza: This is indeed a problem. Your paper (1) found that recovery rates were strongly changed when the flow was not properly balanced. This data is available in the supplementary material.

How did you measure the amount of fluid recovered in each sample?

Hsueh-Yuan: By measuring their net weight.

Amuza: With AtmosLM probes, this can also be accomplished by visually monitoring the flow exiting the probe during in vivo experiments. If the peristaltic pump is pulling fluid out of the probe faster than the syringe pump is pushing fluid in, air will enter the system through the vent in the probe and be visible as bubbles in the tubing. If instead the syringe pump is pushing more fluid than the peristaltic pump is removing, the excess fluid will exit the probe through the vent hole. The vent hole is downstream from the membrane, and does not interfere with microdialysis.

What suggestions do you have for others using AtmosLM to study antibody concentrations?

Amuza: Do you have future projects in mind for large molecule microdialysis?

Hsueh-Yuan: Yes. We have been working on several projects using AtmosLM microdialysis. The Amuza FC-90 is a game changer for any microdialysis experiment:

4 channel operation: collect from up to 4 animals simultaneously.