How to Choose the Right Behavioral Test for Your Research 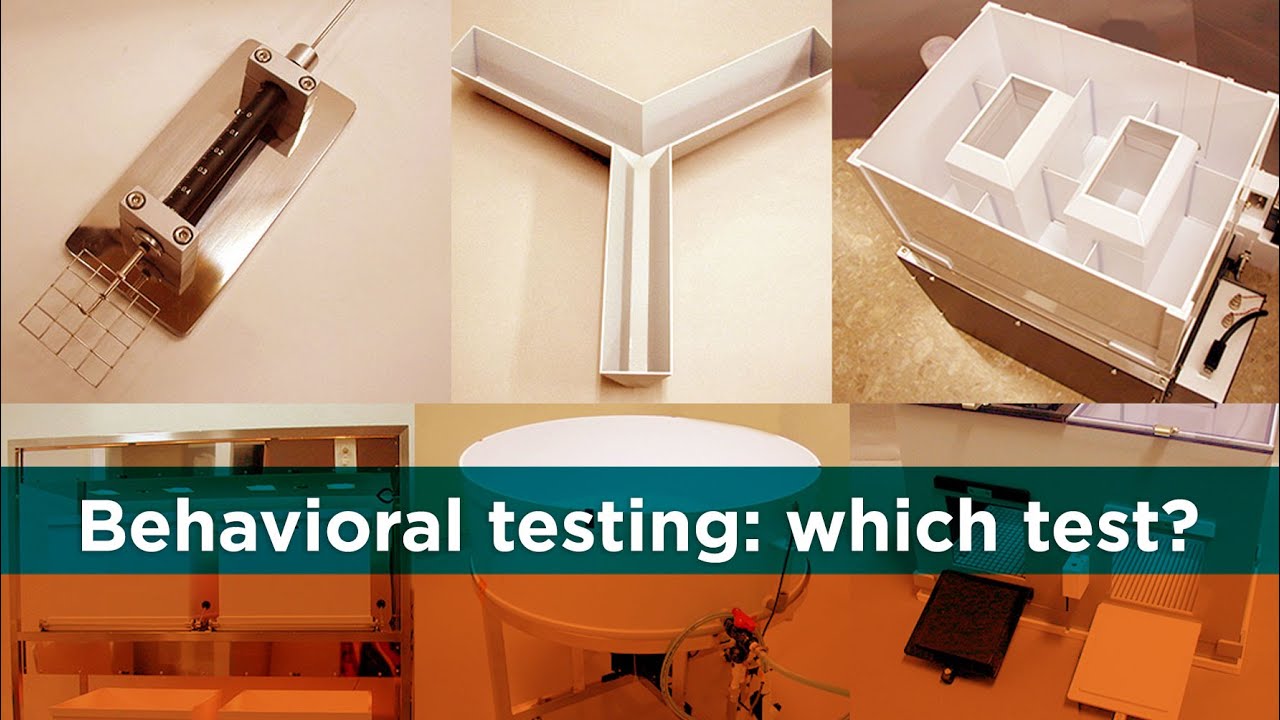 New to Behavioral Research? Understanding how to choose the right behavioral test for your experiment is crucial.

There are several main categories of behavioral tests used to assess a variety of different brain functions and how they relate to behavior. In this post, we will describe these categories, the types of tests and what they measure.

There are a variety of mazes and operant tests that can be used to examine learning and memory in rodents. Below are some common examples, as well as what they are traditionally used to test.

This test is quite simple and can be performed inside the animal’s home cage. It is based on the tendency of rodents to spend more time exploring a novel object than a familiar one and requires the use of recognition memory.

The Morris Water Maze is a water navigation task used to assess spatial learning and memory. In this task, animals must learn to find and remember where a hidden platform is that enables them to escape the water. Since rodents are averse to water, they are motivated to quickly find the hidden platform, which they cannot see because the water in the maze is opaque. Measuring response latency to the platform once the animal has learned where it is can be used to assess spatial working memory. This test can also be used to identify depression-like symptoms if the animal fails to show motivation to swim.

The setup of the Barnes Maze consists of a circular surface with up to 20 around the outside of the circumference. Visual cues like-colored shapes or patterns are placed around the table for the animal to see. Under one of the holes is an “escape box” which the animal must learn to find using the cues. Rodents don’t like open spaces so they typically are very motivated to find the escape box.
Measuring the latency it takes for the animal to find the escape box is an indicator of spatial working memory.

The T-Maze spontaneous alternation test can be used to measure exploratory behavior. Rodents typically prefer to visit a new arm of the maze rather than a familiar one. The T-Maze can also be used to measure spatial working memory, by placing a reward at the end of one arm of the maze and then alternating the reward. The animal must learn that the arm that was previously not rewarded now is.

The Y-Maze is very similar to the T-Maze with the exception that each of the arms is evenly spaced. The Y-Maze is thought to be slightly easier for rodents to learn compared to the T-Maze.
Interested in behavioral testing using several different maze types? Our Free Maze system at AMUZA gives you the opportunity to switch between up to eight different maze configurations. Learn more.

Fear Conditioning (FC) is a type of associative learning task in which experimental test subjects learn that a previously neutral stimulus is associated with an aversive stimulus (foot shock). This learning is evidenced by anticipated freezing in response to the previously neutral cue even in the absence of the foot shock. With fear conditioning, animals learn to fear both the stimulus and the context that the stimulus is presented in. This test can be used to measure hippocampal-dependent contextual memory as well as fear processing in the amygdala.

This is an operant test used to measure the motivational states that are connected to objects or experiences. You can measure both preference and avoidance by recording the amount of time the animal spends in the arena with the associated stimulus. This test is most commonly used to measure the rewarding and aversive effects of drugs. For these experiments, drugs are introduced in specific contexts, and then the animal is tested on how much time they spend in that particular context in the absence of the drug.

The open-field test can be used to measure exploratory behavior and general locomotor activity in rodents and is a great test for measuring the toxicity of drugs in preclinical settings.

In the accelerating rotarod test, the experimental test subject is placed on a rotating cylinder that is suspended in the air above the cage floor. Rodents will try to stay on the cylinder to avoid falling. The experimenter can measure the length of time that the animal stays on the rotarod. This is a great test to measure balance, coordination and motor planning and is effective for animal models of Parkinson’s disease and other neurodegenerative disorders.

Also known as the forelimb grip strength test, in this test animals pull on a horizontal lever while the subjects are held by the tail and lowered towards the apparatus. Peak tension or the force applied to the bar just before the animal loses grip is applied. This test is useful for measuring and assessing deficits in motor function.

Pre-pulse inhibition, also known as a reduction in startle response or PPI, is a phenomenon in which a weak stimulus (Pre-pulse) can suppress the startle response to a subsequent stronger startle stimulus (pulse). Impairments in PPI are thought to underlie impairments in sensorimotor gating, which is a common impairment seen in schizophrenia. Typically the way it works is that an animal is placed into a cylindrical chamber and a startling acoustic stimulus is played. The latency of the animal’s startle response to both the pre-pulse and the pulse can then be quantified.

The five-choice serial reaction time task, also known as the (5CSRTT) is commonly used to test attention and impulsivity in rodents. This task is typically carried out in an operant chamber, like our Touch Panel operant chamber, equipped with at least 5 holes. In this task, animals must correctly identify which of five holes has been illuminated via a nose poke. The time that the hole is illuminated can be shortened so that the animal must pay close attention in order to make the correct choice. Between trials, the experimental test subject must also inhibit responses to other holes until the next hole is illuminated. This task is quite useful for animal models of neuropsychiatric models like schizophrenia and autism.

Learn about all of the behavioral test options offered by AMUZA