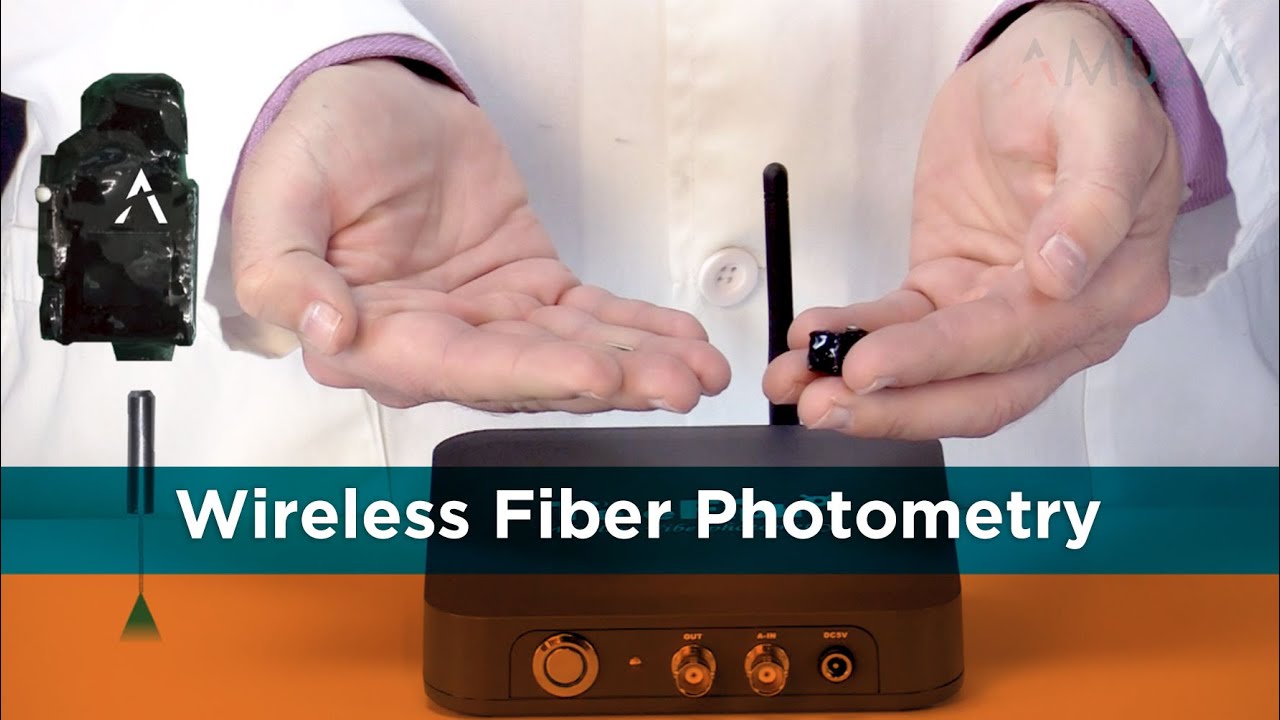 We would like to tell you about Amuza’s new wireless fiber photometry (TeleFipho). It’s our newest way to track calcium and neurotransmitters, and it works in real-time in freely moving animals. It’s easy to use, easy to process your data, and it’s ready to go right out of the box.

Fiber photometry is one of the newest tools available to neuroscientists who wish to correlate behavior with neural activity. It’s a powerful, ultra-fast technique used to measure calcium, neurotransmitters and other molecules in vivo in real-time. But until now the technique has required a connection – a fiber optic cable connecting the research animal to the rest of the optical hardware outside of the cage. This cable limits animals’ freedom of movement and social interactions. It is also fragile and can make your data noisier. This, in turn, can limit the design of your experiments.

With Telefipho all of the optical hardware – light source, optical filters, and photodetector – are combined in a small headstage. The rechargeable headstage communicates by radio with a base station. Your animals can move through tunnels and doorways and interact freely during experiments. Telefipho can also improve video tracking: tracking software often confuses a swaying cable with a mouse that is still moving. This can complicate the scoring of freezing behavior during fear conditioning.

The headstage mounts directly on an FC size fiber optic cannula without any intervening cables or interconnects. This maximizes light transmission and minimizes noise and artifacts. This headstage weighs just 3 grams and has been tested with both mice and rats.

To use the system, an optical fiber is implanted with the tip placed at the brain region of interest. Blue light from an LED in the headstage is sent through the fiber to excite the fluorescent sensors expressed in the target region. The sensor molecules fluoresce in proportion to the concentration of the analytes, and some of the fluorescent light travels back through the fiber to be measured by a photodetector. A fluorescence filter cube, combining bandpass filters for excitation, a bandpass filter for emission, and dichroic mirrors are used to remove extraneous wavelengths and separate the light paths. The headstage transmits the data to the base station and then to your computer.

Since only a single narrow fiber is implanted inside the skull, the technique is much less invasive than imaging, especially for targets deep inside the brain.
The fluorescent signal is recorded and allows tracking of changes in analyte levels on a subsecond time scale.

TeleFipho data is also easy to work with. Removing the cable means removing the motion artifacts caused by rotary joints and long flexible waveguides, so you won’t have to process your data to correct for them.

TeleFipho software provides a real-time view of the data, allowing you to quickly optimize light levels and detection sensitivity. You can manually add timestamps and notes to the data, or you can connect your behavioral equipments’ outputs to TeleFipho and automatically align behavioral events with the fluorescence data.

You can also send the signal to your own recording equipment and process the data using your own software.

With the ever-increasing number of genetically encoded fluorescent indicators for molecules beyond calcium, such as dopamine, glutamate, acetylcholine, norepinephrine, endocannabinoids, and even cyclic monophosphates, fiber photometry is certain to become a versatile tool in your lab. This is doubly true since the vectors used to express the sensors are becoming increasingly precise at targeting specific cell types and circuits so that results are increasingly specific with less interference from off-target cells and molecules.