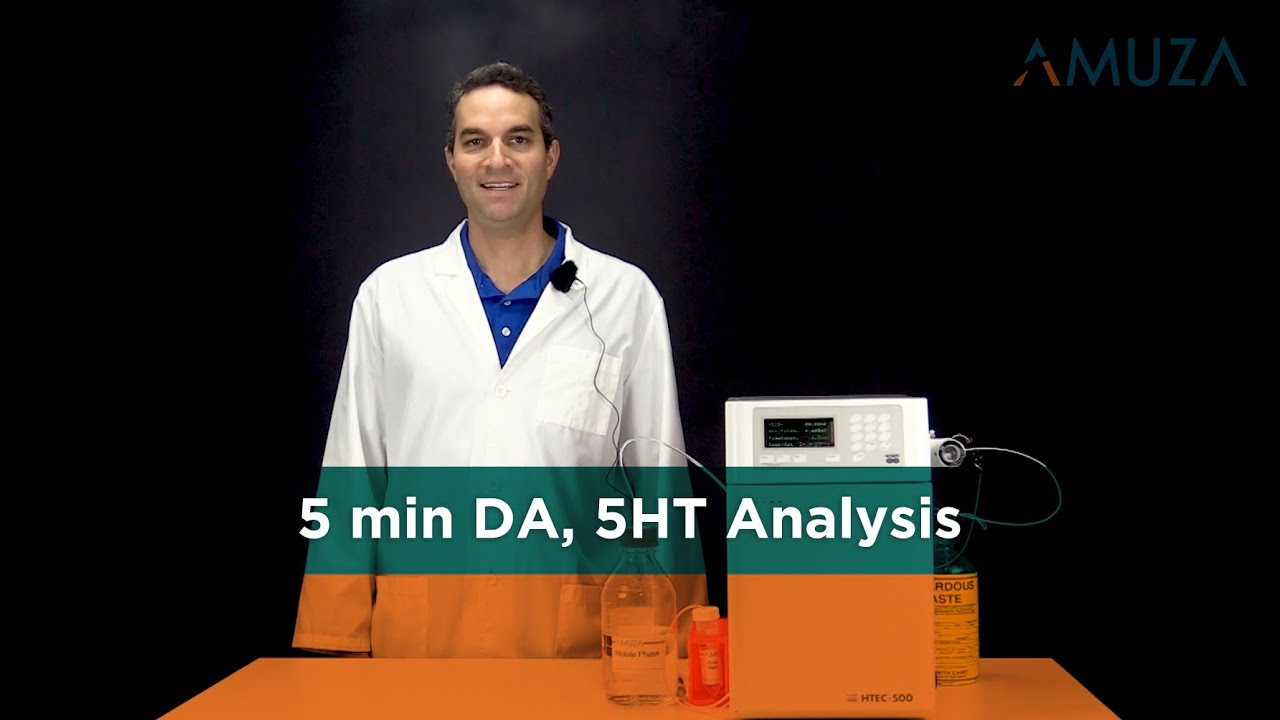 *Find the best catecholamine analysis for your samples here

For in vivo monitoring of dopamine and serotonin levels, the technique of microdialysis coupled with HPLC-ECD is widely used. However, levels of dopamine and serotonin in microdialysate can widely vary, and sometimes the level can be as low as the nM level. In studies, especially on mice, researchers use small active membrane lengths which results in lower levels of dopamine and serotonin. Here we introduce a fast and ultra-sensitive method for analyzing dopamine and serotonin levels with improved throughput and resolution time. One way to improve the sensitivity is by using micro-bore columns. However, chromatograms obtained in this way have large solvent-front peaks which interfere with peaks having an early retention time. Additionally, the column loadability can be as low as 2 μL which is not ideal for microdialysis applications. Chromatograms obtained using a general 3 or 5 μm particle ODS columns show a large number of unknown peaks which can interfere with the target peaks. In general, an earlier retention time results in sharper peaks but fast elution also increases the chance of interference with other peaks. Moreover, the electrochemical detector has problems detecting peaks with early retention times in which the solvent-front peak interferes. Thus, the ideal condition for simultaneously minimizing analysis time and maximizing sensitivity is as follows:

We approached these issues by improving the separation conditions for dopamine and serotonin. An innovative PP-ODS column was developed with the specification of the 2 μm ODS with low retention for hydrophilic compounds and packed in a 4.6 ID x 30 mm column to achieve higher sensitivity and throughput.

Male Sprague-Dawley rats (250-300 g) were used in this study. The rats were anesthetized with pentobarbital sodium (50 mg/kg intraperitoneally) and fixed on a stereotaxic apparatus. The intracerebral guide cannula (AG-4, Eicom) for the microdialysis probe was implanted in the frontal cortex (guide tip located at A=+3.2, L=2.8, V=1.0) where, in general, the dopamine level is notoriously low. One day later, the microdialysis probe (2 mm active membrane length, A-I-4-02 Eicom) was inserted into the frontal cortex via the implanted guide cannula and perfused with Ringer’s solution at 2.0 μL/min in a freely moving condition. The microdialysate was collected into an injector loop (20 μl) for 5 min and then automatically injected into an HPLC-ECD system, HTEC-510, by an online injector, EAS-20 (Fig. 1).

Peak identification was assessed by performing a pharmacological study in the striatum (guide tip locating A=+0.2, L=3.0, V=3.5 mm). After obtaining the basal level, 10 μM tetrodotoxin was administrated via the microdialysis probe or 50 mg/kg B.W. pargyline was administrated by IP injection.

Each chromatogram was completed in 5 min and then the next sample was allowed to be injected. One column was continuously used for more than six months at low back pressure within a range of 6.5-10 MPa. By increasing the flow rate, the analysis throughput could become faster. The lowest detection limit was about 30 fg (s/n=3), based on chromatograms obtained from a real sample analysis (Fig. 2) and not from standard samples. Using this methodology to determine the detection limit is more realistic since unknown peaks can cause interference. Dopamine and serotonin were clearly separated from the compressed solvent-front peaks and other unknown detectable peaks. This may be a result of ion exclusion due to the high concentration of an ion-pairing reagent and the low retention ability of the PPODS column to hydrophilic substances. A stable background was achieved by the combination of the PP-ODS column with a graphite electrode (which has an improved noise level that is more than twice the s/n level of glassy carbon electrodes). Microdialysis samples can be injected up to a volume of 40 μl, the optimum loading volume was is up 20 μl. The linearity of the peak response was confirmed within a broad concentration range (Fig. 3).

The peak identity was also confirmed by a qualitative microdialysis study in the rat striatum as shown in Fig. 4 and Fig. 5.

The combination of the HTEC-510 and the PP-ODS column offers a more concise analysis method with enhanced sensitivity which allows for shorter sampling periods.

Fig. 1 – High Throughput Analysis of Dopamine and Serotonin. The sample was automatically injected via the online autoinjector. The total injected volume was 10 μl (2 μl/min x 5 min). The dopamine peak above corresponds to 98 fg.

Fig. 2 – Basal Level of Dopamine and Serotonin in the Frontal Cortex