Streamline Your Nitrite and Nitrate Analysis

The ENO-30 continues the tradition of Eicom’s successful ENO-20 NOx analyzer. The ENO-30 system is a specialized HPLC for separating and detecting nitrite and nitrate in various biological fluids. The system makes use of a simple Griess reaction, in which nitrite reacts to form a light-absorbing compound that can easily be detected. However, compared to a typical plate or tube-based Griess assay, the ENO-30 greatly enhances sensitivity and reproducibility. In addition, high throughput analysis is achieved by pairing the instrument with an HPLC autosampler, an impossible feat for the gas phase chemiluminescent detectors sometimes used to detect nitric oxide. Data collection, calibration, and analysis are handled by Eicom’s Clarity software package.

Measurement of Nitrate
and Nitrite in Biopsy-Sized
Muscle Samples 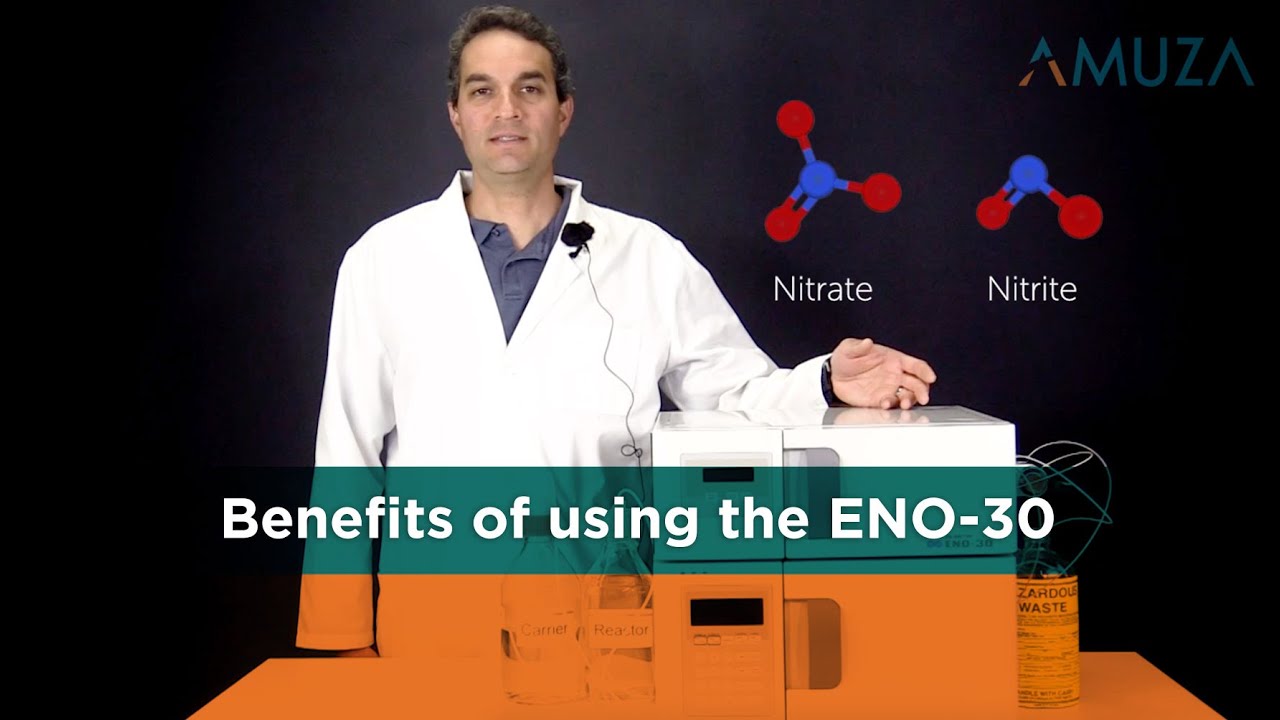 Nitrate and nitrite have been revealed as key signalling molecules in human physiology. However, one of the main limitations on nitrate and nitrite research is the ability to measuring these anions accurately in biological samples because their concentrations are very small, particularly plasma nitrite which is at nanomolar level. For this reason, we have been using the ENO-30 analyser over the last 2 years, which is capable of detecting these small concentrations of nitrite in biological samples rapidly and in a simple way. This technology is helping us to go further in our research on nitrite metabolism and to decipher some of the key roles of this molecule in cardiovascular health.

The data shown here is a typical profile obtained from a human plasma sample using Eicom ENO-30, NOx Analyzer.
The peaks correspond to 110 nM nitrite and 73 µM nitrate in 10 µl applied sample to the ENO-30.

Sensitive enough for a small volume of biological samples. The typical sample is just 1-50 μL of blood plasma, urine, saliva, breath condensate, tissue homogenate, cell culture supernatant, or microdialysate. Simple sample preparation consists of the addition of an equal volume of methanol to inactive and precipitate proteins, whereas low protein samples can be direct-injected without prior manipulation.

How does it work? 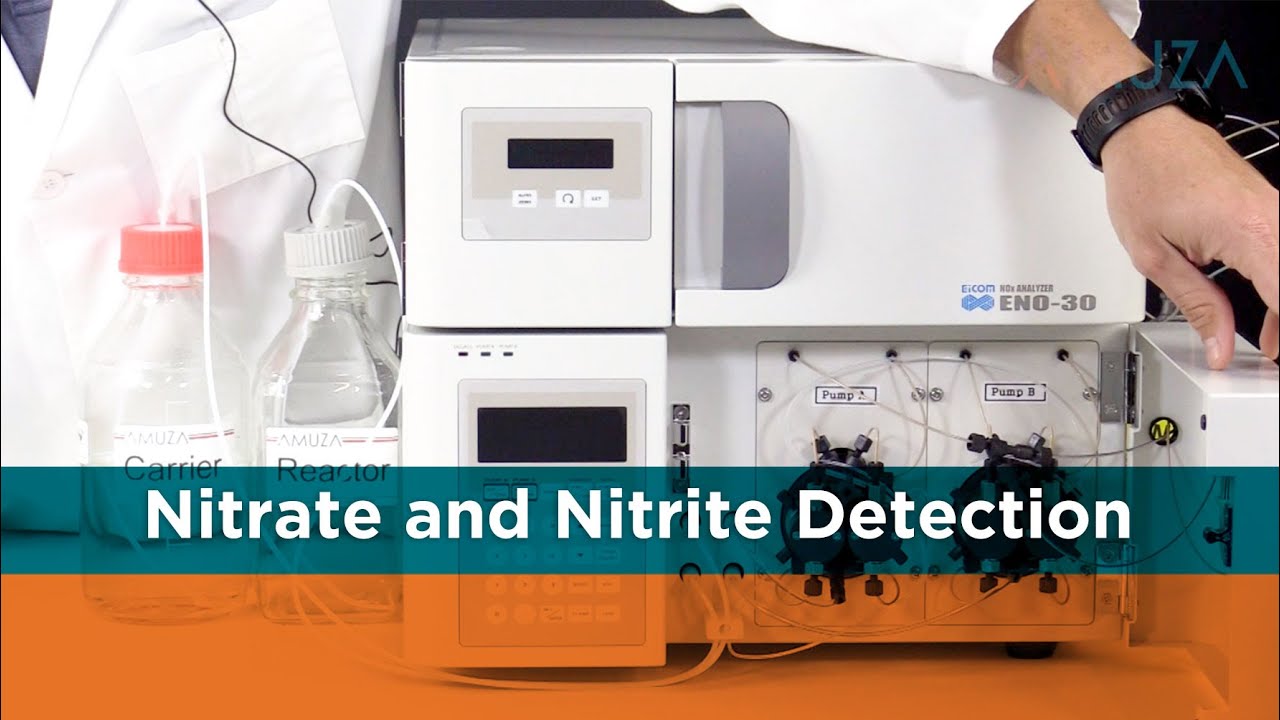 Working on only nitric oxide, how about nitrite?

If detection of nitric oxide is important to your research, have you thought of detecting nitrite, which can bring you more insight? The detection of nitric oxide (NO) in biological liquid samples is extremely difficult due to the transient half-life of NO molecules. Some report the biological lifetime to be in the order of milliseconds. Once you remove the sample from the animal or another source, it is almost impossible to directly detect nitric oxide. Thus, the detection of nitrite and nitrate, considered to be the major metabolites of NO, can be used to determine the NO levels. Moreover, if you evaluate the nitric oxide level with an in-vivo sensing procedure, it shows only one aspect of the nitric oxide profile. Monitoring nitrite level has become increasingly important in recent years. Studies have shown nitrite to be indirectly related to physiological activity and it is also a signaling molecule. The specific biological activity of nitric oxide is explained here.

Nitrite and nitrate (NOx) assay kits are not sensitive enough

The reported range of nitrite levels in the plasma is as low as 50 to 300 nM. On the market, fluorometric or colorimetric reagent kits to detect nitrite and indirectly nitrate are available following enzymatic reduction. The typical detection limit is 20 pmol which is equivalent to 1-10 µM with actual sample volumes. This lower limit of detection is not robust enough to detect nitrite in biological fluids. Moreover, those reagents are relatively specific to nitrite, but still, there can be cross talks with other compounds. The ENO-30 easily provides quantitative data with enhanced specificity and sensitivity for nitrite and nitrate.

The ENO-30’s high sensitivity and specificity are accomplished with the combination of a diazo coupling method and chromatography. Nitrite and nitrate are separated from other substances on a unique separation column and mobile phase. Nitrite then reacts with a compound called Griess reagent and generates diazo compounds which have a red color. The level of nitrite can be monitored with peak height or area with a retention time of 4.5 min from the injection of the sample. Nitrate is reduced to nitrite on a reduction column which reacts to the Griess reagent as well. The nitrate peak has an 8 min retention time. The level of the diazo compound is measured by absorbance at 540 nm using a visible detector. The separation column is robust as well as the entire ENO-30. The normal lifetime of the column is at least 3 months with regular use. All separation and detection technologies are provided by Eicom for the ENO-30 including mobile phase ingredients, Greiss reagent, separation columns, and reduction columns. You can relax and detect nitrite and nitrate with 10 nM sensitivity (0.1 pmol)

How the ENO-30 attained high sensitivity?

The system configuration and separation technology of the ENO-30 are the reasons for the enhanced sensitivity. The column oven of the ENO-30 includes the detector cell, which improves stability. The eight microliter replacement volume of the binary pump is also important in eliminating any mixing noise from the Griess reagent. If you were to use the same method on a normal HPLC system, you may not be able to obtain this sensitivity and the HPLC could be damaged. In fact, the level of hydrochloride in the Griess reagent is harmful to most HPLC systems but the ENO-30’s pump system has no problem tolerating it.

What is the advantage of the ENO-30 compared to chemiluminescence procedures?

Nitric oxide and ozone react in the gaseous phase to produce chemical luminescence. It is possible to detect nitrite in the liquid phase using this procedure but it is not as simple as using the ENO-30. What types of samples require the nitrite assay? Usually, the sample matrix is liquid; the ENO-30 is the perfect device for this. In the process of reducing nitrite/nitrate, the system is heated which results in condensation on the inner surface of the glassware after cooling down. The condensation dissolves the nitrite/nitrate and will have an effect on carry-over when the condensation evaporates during the next process. This is a common reason for variation in the detected values of nitrite using the chemiluminescence procedure. As explained above, the ENO-30 installed with an autosampler yields hands-free analysis. You do not need to clean the glassware of the detection system following the analysis of several samples or following the sample conversion from liquid to gas.

1. Plasma (or Serum)
Add the same volume of methanol.
Mix using a vortex for 10 sec.
Centrifuge at 10,000 G for 10 min.
Inject the collected supernatant.
Change the precolumn after every 50 samples.
Note: Plasma or serum are directly acceptable without the sample prep but the precolumn should be changed after every 10 to 20 samples.

3. Cell Culture
The same applies as described in #2 above or in direct injection below. In the case of direct injection, please change the precolumn frequently (every 10 to 20 samples). Otherwise, replace it after every 50 samples.

4. Urine
Dilute with carrier solution to 50 times the volume and then inject.
Replace the precolumn after every 50 samples.

5. Saliva. Dilute with carrier solution to 10 times the volume and then inject.
NOTE: The precolumn content should be changed after every 50 samples. This is a rough estimation.

6. Microdialysate
Direct Injection: In the case of microdialysate, 100 to 200 samples can be injected per precolumn.

The specifications are subject to change without notice.